Posted on 8 September 2013 by Nalaka Gunawardene 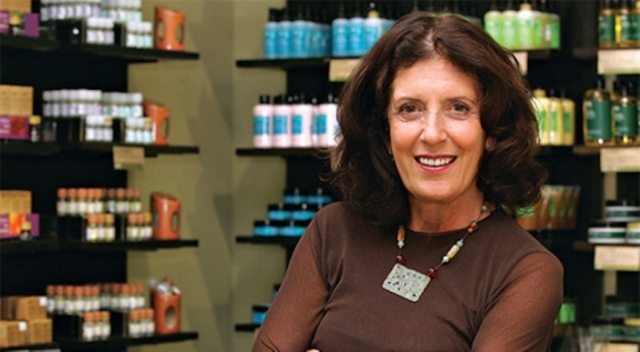 With those words — and with a mischievous smile — entrepreneur and activist Anita Roddick (1942 – 2007) once autographed a book for me.

You’re hard to forget, I told her. Indeed, the maverick founder of The Body Shop is one of the most unforgettable persons I have met in a quarter century of global travels.

Our two close encounters — a dozen years apart, and on two continents – are among my precious memories.

When Anita died six years ago this week, aged 64, media obituaries described her as one of the world’s most successful women entrepreneurs and also as the ‘Queen of Green’.

She was much more than just green. We remember her as a formidable one-woman cheering squad for a range of social, humanitarian and environmental causes. She stood for justice, fairness and equality in both business practices and her various campaigns.

From ethical sourcing of raw materials for her own company’s products to speaking out for human rights and more humane globalization, she walked the talk.

“I came out of the womb as an activist. I’m part of the 1960s; it’s in my DNA,” she once wrote. She made no apologies for being herself, and believed: “Activism is the rent we pay for being on this planet!”

A few months prior to her death, she declared in an op-ed in Newsweek: “The idea of dying with loads of money doesn’t appeal to me at all. I want to use the last years I have to get my hands dirty working for civil change. I want to be able to see the positive difference that money can make by giving away what I have.”

It was revealed after her death that she’d donated her entire GBP 51 million fortune to various charities. Again, walking the talk…

Without going to any business school, this resolute housewife from Littlehampton built up a global business in skin and hair care products. By the time she sold the company in 2006, some 30 years after its humble beginnings, the Body Shop had over 2,200 stores in 55 countries.

And without any formal training in media or communication, she became one of the best public communicators of our times – speaking eloquently for her company’s ideals and various charitable causes.

Although she was widely travelled and well informed, it wasn’t just her marshalling of facts, figures and analysis that gave her a sharp edge. She was passionate about righting wrongs, and had the courage of her conviction to protest.

Describing the Body Shop’s campaigning activities as the ‘politics of consciousness’, she used her chain of stores as billboards and put her considerable fame to generate publicity for a variety of good causes. 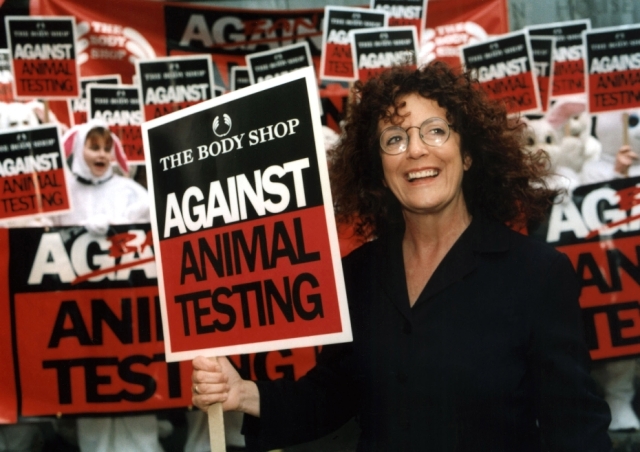 In some global campaigns, she partnered with groups like Greenpeace and Amnesty International. Sometimes this pitted her retail chain against giant multinationals – such as Shell, whose conduct in Nigeria was the focus of her support to the Ogoni people, who were driven out of their homelands when oil was discovered.

All this was done with a twinkle in the eye, and fire in the belly.

Anita was passionate with purpose, determination and focus. The key ingredients of successful public communication, as she listed them, were passion plus learning from your mistakes, and “not taking yourself too seriously”.

Her advice to fellow activists was distilled into eight words: Get Informed. Get Inspired. Get Outraged. Get Active.

Anyone could become an activist, she believed. “The job of a citizen is to keep his mouth open.” She loved the Dorothy Sayers quote: “A woman in advancing old age is unstoppable by any earthly force”.

Our paths first crossed in Vancouver in the summer of 1991. I was giving a workshop at a Canadian youth environmental conference building up to the forthcoming Rio Earth Summit. At the centre of it were two of my favourite activists: geneticist-turned-TV host David Suzuki, and Anita Roddick.

Youthquake was part conference, part youth jamboree and altogether a great deal of fun. Anita came with her younger daughter Sam, and spent hours telling real life stories in her inimitable way – full of laughter and making fun of power and pomposity.

No time was wasted being prim and proper. Names were named – and generously lampooned. All this belied her Italian roots than British upbringing, but also made her such delightful company. No wonder she was a favourite of the media in search of quotable quotes.

In those heady days, activists had a simpler choice of adversaries — Uncle Sam and World Bank usually ranked at the top; big oil, tobacco and pharmaceutical companies were not far behind. When globalisation gathered pace, things became more complex.

Anita marched fearlessly into this bewildering new world. She seized some aspects of globalisation – especially the spread of Internet and proliferation of NGOs — to critique and challenge its downside. In 2006, she launched her own personal website and blog at www.AnitaRoddick.com.

“I am overwhelmed by the potential of the web to link like-minded people and move them to mass-action” she wrote. “We are excited to experiment in other media too — perhaps subversive billboards, or a television program, or other print projects. As someone once said, we are only limited by our imagination.” 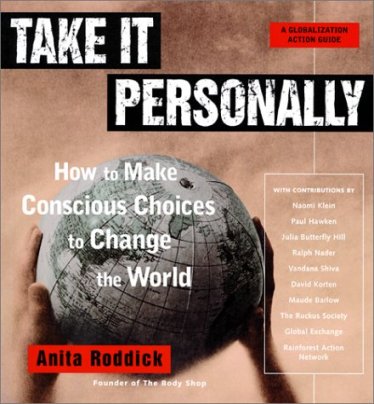 The book she autographed for me, titled Taking It Personally: How to Make Conscious Choices to Change the World, came out in 2001 and was her rough guide on run-away globalisation. It offered citizens everywhere some tools and inspiration to work for constructive solutions. Among its guest contributors were fellow travellers Vandana Shiva, Paul Hawken (Natural Capitalism), Naomi Klein (No Logo), and consumer activist Ralph Nader.

It was a global TV series that brought us together again in 2003.  That summer, I was among two dozen people from around the world who joined a brainstorming meeting at Anita’s country home, Highfield House, in Somerset, England.

We discussed the future of Hands On, the series she’d been hosting on BBC World for three years. Amidst much doom and gloom peddled by the media, Hands On offered some hope by featuring sustainable technologies, business ideas and processes that had been proven somewhere in the world.

By showcasing such practices, its originator Robert Lamb and producer Janet Boston sought to inspire entrepreneurs, communities or even governments to emulate or adapt.

Anita brought her usual passion and dynamism to our discussion. Covering good news was already going against the media’s grain, but it was harder to keep at it year after year, especially when the broader communications landscape was changing rapidly.

She challenged us on how to make Hands On more interesting to younger viewers in different cultures. We recognised that offering one media product to a global audience was a tough sell: most people prefer a home-made, local story.

In the months and years after that meeting, I went on to do just that in Asia, localising Hands On in Cambodia, India, Laos and Nepal. We have made modest progress, but there is much unfinished business.

In that long journey ahead, we sure miss Anita, but as she used to say, there is ‘no bloody alternative’ but to slog on.