When Worlds Collide #24: Kicking Lead in Petrol – Lessons for Cleaning up Dirty Diesel?

Posted on 15 July 2012 by Nalaka Gunawardene 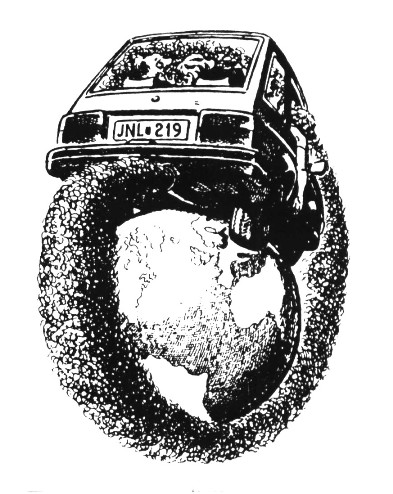 My column last week – about World Health Organisation confirming diesel fumes cause lung causer – elicited many responses. Some cautioned that phasing out high sulphur diesel from Lankan roads isn’t going to be easy.

The automobile industry has much at stake and would want to continue business as usual. Policy, legal and regulatory changes take time, and will require evidence-based arguments and sustained pressure. Health campaigners and environmentalists have their work cut out for them.

They must stay focused on vehicle emissions. Yes, some power plants are also prolific users of diesel, but they have smoke stacks and their emissions can be centrally treated. In contrast, millions of diesel-burning vehicles are a distributed — and mobile — source that emits fumes right in our faces.

This debate is not about diesel vs. petrol vehicles, or rich vs. poor. Neither is it some esoteric ‘green’ pursuit. Our lives are at risk. Air pollution is an equal opportunity killer: short of carrying our own oxygen tank everywhere, we simply can’t avoid the fouled air.

Things can only get better from where they are now, as confirmed by Ruwan Weerasooriya, President of Clean Air Sri Lanka – a non-profit group that brings together concerned professionals working in government, private and academic sectors.

He adds: “When we burn high sulphur diesel, it emits larger amount of Sulpher Dioxide gas and Particulate Matter known as PM10. The Ceylon Petroleum Corporation (CPC) still has not taken action to go for a cleaner fuel supply programme.”

Improving fuel quality is necessary, but not sufficient. Other measures – such as enhancing engine efficiency and removing massive state subsidies that currently under-price diesel – are also needed.

In the long run, the government has to weigh the high public health costs of high sulphur diesel.

For sure, tackling toxic diesel fumes will take a good deal of advocacy involving more research, awareness raising, alliance building and perhaps even public interest litigation. In this struggle, we can learn much from how lead in petrol was phased out.

Lead was such a well-known poison that public health specialists were alarmed from the beginning. But the oil industry dismissed these fears, saying the amounts were “too small” to cause any harm.

Not quite. By the mid 20th century, there was compelling evidence on harmful health impacts of long-term exposures to lead in the air – coming mostly from petrol vehicle fumes. Even at low levels, lead can affect brain development, reduce learning ability and cause behavioural disorders — especially in children.

Alice Hamilton, MD, head of Harvard’s Public Health Programme, once told GM’s research chief that he was “nothing but a murderer” for insisting that only leaded petrol could boost octane and raise compression ratios.

Still, it was only after half a century of advocacy and public awareness that the US finally get rid of lead. President Richard Nixon – not particularly known for his green credentials – finally cracked down on it in 1970. By the 1980s, the industrialised world had almost completely phased out lead in petrol.

It took more years and effort to achieve the same in the developing world. Realising the massive health costs that can undermine development efforts and investments, the World Bank and development funding agencies became involved. They provided funds, technology and expertise for the phase-out.

Hemantha Withanage, chief scientist and head of non-profit Centre for Environmental Justice, recalls how university academics and other researchers gathered empirical data for air pollution levels in and around Colombo from the early 1980s. They soon noticed how vehicle fumes were edging out factory emissions as the main source.

The first major study, carried out in 1989-1991 by the National Building Research Organisation (NBRO), showed that of the 49 locations monitored, 8 were already critical for some factors. Another study, by the Central Environmental Authority (CEA) during 1991-92, analysed the air quality at six roadside locations in Colombo and found a direct link between the volume of traffic and pollutant levels.

Lead was one such pollutant, along with dioxides of sulphur and nitrogen, carbon monoxide and suspended particulate matter, or SPM.

This and other evidence led to Clean Air 2000, an Action Plan for Air Quality Management in the Colombo Metropolitan Area, adopted in 1992 at a governmental seminar that brought together officials, researchers and activists. This provided policy direction and targets for action on a range of pollutants.

Removing lead from petrol seemed an easier goal – after all, it involved centralised action by CPC, the state-owned petroleum monopoly (at the time) that operated a single refinery. In reality, it took over a decade.

Even as more vehicles pumped more lead into our air, proposed measures to curb it meandered through the labyrinths of bureaucracy and stalled at an uncooperative CPC. That’s where further research and dogged advocacy made a difference – eventually.

In 1995, two chemists of the Kelaniya University – Dr Malini Arewgoda and M S Perera – measured blood lead levels of road users at selected locations in metropolitan Colombo. They found that traffic policemen had the highest levels of lead — more than thrice the safe levels —
followed by three-wheeler drivers and street vendors. Even urban school children were exposed to high levels.

Other researchers, including paediatrician Prof Manouri Senanayake of the Colombo University, probed further on blood lead levels of school children walking along the streets of Colombo’a crowded Borella area.

Their findings added to the body of evidence – but CPC still didn’t act.

“The only reason why the Petroleum Corporation was not switching to a lead-free fuel was because of the lead industrial lobby,” recalls environmental lawyer Lalanath de Silva, who then headed the public interest law group Environmental Foundation Limited (EFL). “Efforts to get change through dialogue with CPC and CEA were not successful. Many promises were made – but none kept.”

Frustrated and outraged, Lalanath filed a fundamental rights case against the Minister of Environment in 1998 “for failing to issue fuel standards as well as mobile emission standards and imported vehicle standards”.

By then, Sri Lanka had adopted ambient air quality standards. His argument before the Supreme Court was that his right to life was adversely affected by vehicular pollution because city levels did not meet those standards. These had to be enforced by the minister.

“My complaint was that by failing to do so, he (the Minister) was, by his omission, violating my right to life,” Lalanath recalled in an email interview. The case was heard before a Constitutional bench of five judges. In the end, the state agreed to all the relief he had sought.

Despite this, it took another four years, and a change of government, for the CPC to start phasing out leaded petrol in 2002. By then, many developing countries had got rid of it.

Again, scientific evidence showed quick impact of this change. In 2003, Prof Manouri Senanayake went back to the same Borella locations to measure blood lead levels in school children from comparable backgrounds and using the same techniques as before. She found a ‘statistically significant decline’.

“The economic cost involved in changing to unleaded petrol has been worthwhile,” she said in a scientific oration later that year.

Even hard-won battles need continued diligence. Physicist Dr Janaka Ratnasiri points out that our petrol is not entirely free of lead – yet. “Currently, CPC specification on petrol specifies the maximum permissible amount of lead in petrol as 13 parts per million for both 90 and 95 octane petrol.”

2 Responses to When Worlds Collide #24: Kicking Lead in Petrol – Lessons for Cleaning up Dirty Diesel?