When Worlds Collide #25: Teleworking or not working?

Posted on 22 July 2012 by Nalaka Gunawardene

Boris Johnson and Sebastian Coe pose for photos in front of the giant Olympic rings on Tower Bridge. REUTERS photo

This week, London welcomes the world’s Olympians once again as it becomes the first city to host the modern Olympics thrice.

Even for a global city like London, with well developed infrastructure, coping with the influx is quite a logistical challenge. So its city authorities have been urging more people to avoid coming to town. In fact, Transport for London has been running a campaign to get a third of commuters to work from home during the Games.

Then, on July 3, the Mayor of London Boris Johnson scored an ‘own goal’: in a public speech, he called home-working a ‘skiver’s paradise’.

Originally a Scottish word, skiver is slang – both in Britain and Australia – for a lazy person.

The comedian-turned-politician appeared all serious when he said: “We all know that is basically sitting wondering whether to go down to the fridge to hack off that bit of cheese — before checking your emails again.”

Oops. Johnson is known to speak his mind — and he isn’t the only one not yet convinced that working from home, or teleworking, actually works.

British Prime Minister David Cameron has also been defending plans to let thousands of civil servants work from home during the seven-weeks when London hosts the Olympics and Paralympics. His critics say it could signal that Britain is ‘closed for business’.

If that’s the debate in a networked economy, how does teleworking fare in Sri Lanka? We now have more phone subscriptions (fixed and mobile) than people, and at least 15 to 20% of our total population regularly using the Internet. How does this rise of information and communications technologies (ICTs) affect the way we work?

So I asked around in an informal bit of ‘crowdsourcing’, and found some interesting experiences and opinions.

Teleworking has its limits!

Many different people work from home – among them freelancers and consultants who don’t have a single employer or workplace to report to. But the most widely understood definition of teleworking is a flexible work arrangement where an employee (full time or part time) carries out assigned tasks remotely with clear schedules and outputs.

The ability to telework depends on a willing (and trusting) employer, facilities and space at home, a supporting family, and considerable self discipline (no cheese!). Even then, not every job or task can be done remotely.

Good connectivity is crucial. Broadband Internet allows teleworkers to be part of virtual teams. But telecom companies rarely deliver what they promise. As one ICT researcher puts it, we pay broadband prices yet often get a ‘fraudband’ service!

“Telecommuting requires good bandwidth and low latency – one may need to access company records through VPN or cloud based file sharing platforms and do video conferencing,” says Sanjana Hattotuwa, Senior Researcher with the Centre for Policy Alternatives (CPA), a teleworker since 2006.

Even with premium packages that cost more, there is no assurance of consistently high speeds, he says. It all depends on how many others are online — and what applications they are running.

Last year, Helani authored a technical report for the World Bank titled Broadband in Sri Lanka: Glass Half Full or Half Empty? She wrote: “A key challenge is that of bringing a product of adequate quality to consumers. Budget broadband/budget telecom models mean low cost and therefore low prices. But they also mean low quality.”

Another frequent problem that teleworkers — as well as most small businesses — face is unscheduled, multi-hour power cuts. In suburban Nugegoda where I live and work, this wipes at least five to six working days every year. 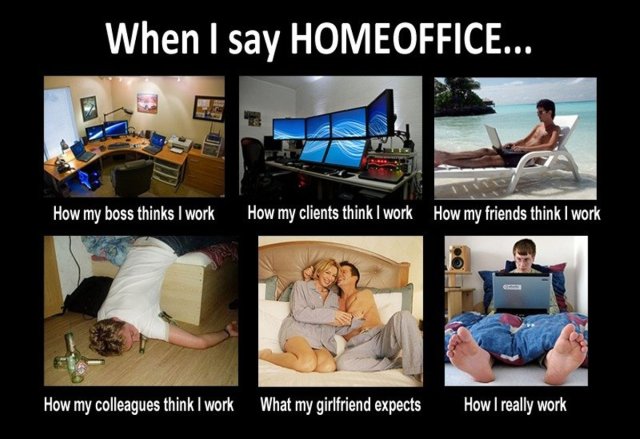 Most regular teleworkers have redundancy for Internet (at least two connections) and laptops with extended batteries. But telecom and power are not the only challenges. A bigger problem stems from perceptions and attitudes.

Some among us seem to think that working from home is a pretence, or such work is somehow not ‘as serious’. It’s harder for those who entered the workforce before the expansion of mobile phones and the Internet to imagine formal work outside a dedicated office.

“Our society still wants everyone to work at an ‘office’ – preferably in Colombo,” says Chanuka Wattegama, engineer turned ICT analyst who has worked in public, private and non-profit sectors in Sri Lanka. “But we can slowly address that. It’s harder to build organisational cultures to accept teleworking. When that’s done, other issues will fall into place.”

Sanjana agrees that organisational culture is a bigger impediment than technology. “Many organisations still believe that working from home is somehow less productive. I find it’s the opposite — the challenge is not around how much of work is done, but drawing boundaries so that work doesn’t encroach on parenting or other familial pursuits.”

Sanjana trusts his own team to work remotely and without supervision. “They are entrusted with work, and where they do it is immaterial to me, so long as deliverables are produced on time,” he says.

Such views are still uncommon in Lankan organisations – and especially among human resource managers. But the corporate sector is warming up to the idea; some companies now cite it as an ethical practice.

Colombo-anchored LIRNEasia works with over two dozen researchers across emerging Asia, many of them in telework mode. As Helani explains, “We are not a face-time organisation. We are deliverable and output based. As long as people do their work by the expected deadline with expected quality, it doesn’t matter where they sit.”

Some employers adopt a more cautious approach to teleworking: trust – but verify.

“I don’t think we can use it as widely as we do in the US,” says an ICT entrepreneur who runs a business developing specialised web-based solutions for overseas clients. He allows teleworking on case by case basis — for long term employees who can be relied upon.

Out of 60 full-time staff in his Colombo operation, only two currently work from home. “Lankans are not as responsible as US workers – their work ethics and responsibility levels are, well, different! We have a long way to go with improving the mindset and professionalism before adopting large scale teleworking.”

Working from home isn’t all cosy or easy, especially to young parents. A teleworking mom says that many family members are “surprised” that she works from home — but still has to send her under-2-year-old son to daycare.

“I have to keep explaining that working from home is actually just like working in an office – the same time commitments, same efforts, just a different location,” she said.

Journalist Mel Gunasekera, a senior editor at Lanka Business Online, is another teleworker who finds she is just as productive but more relaxed working from her suburban home. But she sometimes misses the team work culture, the office gossip and the pressure to meet newsroom deadlines.

She also knows flexi hours have a downside, as there is no particular hour to start or end work. “As a result, work – including reading reports, decoding tapes or chasing up people – can run on till late evening.”

And if your work involves cross-border collaborations with colleagues in different time zones, it can easily stretch the waking and working hours.

I have grappled with this for nearly two decades. The world may be flat but the human body still needs at least six hours of sleep in every 24.

For teleworking to work well, we just need to know when to switch off.

A science writer by training, I've worked as a journalist and communication specialist across Asia for 25+ years. During this time, I have variously been a news reporter, feature writer, radio presenter, TV quizmaster, documentary film producer, foreign correspondent and journalist trainer. I continue to juggle some of these roles, while also blogging and tweeting and column writing. There's NOTHING OFFICIAL about this blog. In fact, there's NOTHING OFFICIAL about me! I've always stayed well clear of ALL centres of power and authority.
View all posts by Nalaka Gunawardene →
This entry was posted in Culture, Employment, ICT, Journalism, Sri Lanka, Transport and tagged Boris Johnson, Broadband Internet, David Cameron, fraudband, Helani Galpaya, ICTs, LIRNEasia, London Olympics 2012, Mayor of London, Mel Gunasekera, Paralympics, Sanjana Hattotuwa, skiver’s paradise, telework. Bookmark the permalink.

2 Responses to When Worlds Collide #25: Teleworking or not working?