Posted on 18 April 2014 by Nalaka Gunawardene

The theme for World Health Day, observed on April 7, was vector-borne diseases – a major public health challenge in the tropics. It was packaged under the slogan: Small Bite, Big Threat.

Vectors are small creatures which carry serious diseases. As the World Health Organisation (WHO) noted, globalization of trade and travel, and trends such as climate change and urbanization, all impact on how vector-borne diseases spread. Some vectors have started turning up in countries where they were previously unknown.

In terms of deaths caused, malaria is the most deadly: in 2010, it killed an estimated 660,000, mostly African children. But the world’s fastest growing vector-borne disease is dengue, which has recorded a 30-fold increase over the last 50 years.

Dengue is mostly transmitted by a mosquito species named Aedes aegypti, which breeds in water containers in and around homes. It is thus closely linked to environmental factors and human behavior.

Last month, the International Federation of Red Cross and Red Crescent Societies (IFRC) included dengue fever in its list of 10 ‘silent disasters’ that don’t receive the policy attention or media coverage they deserve.

To highlight the problem, it released a report titled Dengue: Turning up the volume on a silent disaster (online at: http://tiny.cc/IFRCDen)

In it, the world’s largest humanitarian network noted how, since the 1960s, dengue has expanded from just nine to over 100 countries. And the number of dengue cases has risen from 15,000 to 390 million per year (not all cases are reported or correctly diagnosed).

Today, over 40% of the world’s population is at risk – with three quarters of them living in the Asia Pacific. In many affected countries, dengue causes a significant economic and social burden.

After decades of sustained effort, malaria in Sri Lanka is now in the ‘elimination phase’. Dengue is becoming the number one killer mosquito-borne infection.

Although clinical dengue-like illnesses had been recorded since the early 20th century, dengue in Sri Lanka was serologically confirmed only in 1962. Initially it spread slowly, but since 1988, dengue fever (DF) and dengue hemorrhagic fever (DHF) epidemics have been regular occurrences. The island is now among the 30 most endemic countries.

Two researchers attached to the Faculty of Medicine at University of Peradeniya, Dr P D N N Sirisena and Dr F Noordeen, have recently traced the evolution of dengue in Sri Lanka. Their paper, published in the International Journal of Infectious Diseases (Feb 2014), is available for open access at: http://tiny.cc/DengSL

At the beginning, dengue was considered an ‘urban’ disease. But Sirisena and Noordeen note how this pattern has changed in India and Sri Lanka with the disease now spreading to rural areas as well.

Although the highest incidence is still in the Western Province (44.9% in 2007), they say there has been a ‘dramatic increase’ in all other provinces – and especially in the North-Central, Wayamba and Sabaragamuwa Provinces. This is confirmed by official data gathered by the Epidemiology Unit at the Ministry of Health.

“Therefore, there is a potential threat of severe DF/DHF epidemics occurring throughout the country in the future,” the researchers caution.

The country’s dengue coverage map keeps expanding. After the Lankan war ended in mid 2009, dengue has become endemic also in Northern and Eastern provinces, with a high incidence in Jaffna and Batticaloa. Sirisena and Noordeen attribute this to the freer movement of people between former conflict areas and the rest of the island.

Epidemiologists have long known two general ‘peaks’ in dengue cases during the year: the first (dominant) in June-July, coinciding with the South-West Monsoon, and the second (smaller) at the end of the year linked to the North-East monsoon.

Could climate change affect this pattern? Sirisena and Noordeen say the recent extended rainy season — with heavy rains and floods — could be one reason for dengue becoming rampant and more unmanageable in the last five years. 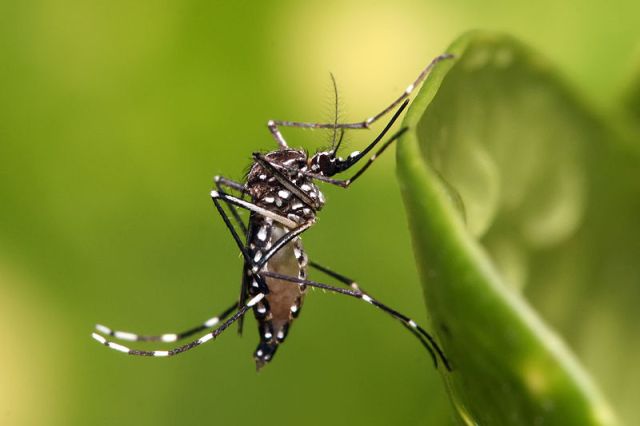 For now, there is no specific antiviral drug or effective vaccine against dengue. Control and prevention are the best available defences.

The dengue virus is more prone to genetic changes. New strains keep appearing from time to time, which makes disease control harder. Aedes aegypti being a day-biter, they cannot be kept away with barrier protections like bed nets.

So higher levels of environmental sanitation become crucial. It involves keeping water containers covered, and protecting or sealing off natural water sources. In short, deprive the vector the watery medium it needs to breed and multiply.

Aedes mosquitoes can thrive in both clean and organically rich water in both natural and artificial containers. Dengue control efforts thus far have focused mostly on removing open freshwater sources. While this is necessary, it is no longer sufficient.

Recent studies show that Aedes aegypti and another vector, Aedes albopictus, can also lay eggs in brackish water, and their larvae and pupae can survive in such water. Sirisena and Noordeen fear genetic changes could lead to mosquitoes that breed in artificial collections of brackish water in coastal urban areas.This, in turn, “may lead to vector adaptation to natural brackish water habitats in the future”.

The bottomline: dengue virus and vector are ‘artful dodgers’. Preventive and control measures must be equally adaptable.

According to IFRC, about 2.5% of those infected by dengue die. But if there is no proper preventive health and care services, deaths can exceed 20%. Early diagnosis and access to proper health services can bring down deaths to below 1% of cases.

“Dengue is preventable and evidence shows it can be contained,” says Walter Cotte, IFRC’s Under Secretary General. “During the 1950s and 1960s, a strategy adopted by the Pan-American Health Organisation to remove Aedes aegypti…successfully reduced and in certain cases eliminated dengue in the Americas.”

IFRC emphasizes on the need for an integrated approach that includes improved case management and diagnosis, increased education and awareness, and community participation in vector control.

Hence the need to ‘turn up the volume’ on this low intensity disaster. 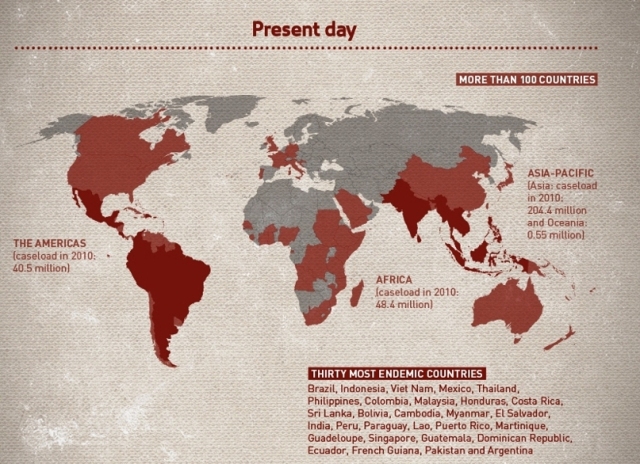 2 Responses to When Worlds Collide #103: Combating Dengue, a ‘Silent Disaster’