Posted on 6 January 2013 by Nalaka Gunawardene

I couldn’t write the When Worlds Collide column this week. Instead, here is a news feature I wrote for Ceylon Today, published on Sunday 16 Dec 2012:

It helps to take a look at the bigger picture once in a while. Today’s modern space and imaging technologies allow us to explore the biggest picture possible – at a planetary level.

Images of our Earth from space have been available for around 40 years. The first images that emerged from early space missions in the 1960s – showing a blue marble hanging in the darkness of space – energized the environmental movement worldwide.

But as technology advances, that vantage view keeps getting better.

Earlier this month, the US space agency NASA released a series of new images that offer an unprecedented new look at our planet at night.

A global composite image, constructed using cloud-free night images from a new generation weather satellite, shows the glow of natural and human-built phenomena across the planet in greater detail than ever before.

It is a map of the location of lights on Earth’s surface. Each white dot on the map represents the light of a city, fire, ship at sea, oil well flare or another light source. (Explore at: http://earthobservatory.nasa.gov)

“Nothing tells us more about the spread of humans across the Earth than city lights,” says Chris Elvidge, a NOAA scientist who has been studying them for 20 years.

This flat map of the globe shows the geographic distribution of the world’s cities that have grown faster than ever during the past few decades. Cities, which cover around 5 per cent of the land area, are home to a disproportionately high share of human beings, and are centres of economic, cultural and industrial activity.

In end 2008, the United Nations confirmed that half of all humans live in urban areas, and projected that 7 out of 10 persons will live in cities by 2050. Much of this urban growth is happening in the developing world.

Our city-centric world is certainly discernible from space, especially at night. The new NASA maps show how cities are concentrated in Europe, the eastern United States, Japan, China and India.

The brightest areas of the Earth are the most urbanized — but not necessarily the most populated. For example, Western Europe has more lights, but China and India have much larger human numbers.

For example, the eastern United States is very bright, because their cities are powered by high levels of electricity use in public spaces and private places. In contrast, the more densely populated areas of China and India are not nearly as bright – at least yet — because the amount of light per person is smaller.

Other trends are also visible. Cities tend to grow along the coast or transportation networks. For example, the US interstate highway system appears as a lattice connecting the brighter dots of city centers. In Russia, the Trans-Siberian railroad is a thin line stretching from Moscow through the center of Asia to Vladivostok. In Africa, the Nile River — from the Aswan Dam to the Mediterranean Sea, runs like a bright thread through an otherwise dark region.

Development disparities are starkly evident in the Korean peninsula, where the industrialized south glows brightly while the poor north barely registers any lights.

These maps remind us that, despite being a crowded planet teeming with over 7.2 billion people, large areas are thinly populated or uninhabited.

Vast expanses of jungles in Africa and South America are mostly dark, as are the deserts in Africa, Arabia, Australia and Mongolia. Areas in the boreal forests of Canada and Russia, and much of the Himalayan mountain range, don’t give out lights bright enough to be picked up by satellite.

The particular circumstances when the satellite captures these images also matter – as seen in the night time satellite image of South Asia.

A black and white image that NASA released recently was taken on 12 November 2012, when much of our subregion was celebrating Divali, the festival of light. That probably showed up the subcontinent a bit brighter.

But unfortunately for Nepal, it was the worse possible moment to be ‘photographed’.

Senior Nepali journalist and editor of Nepali Times, Kunda Dixit, explained why his country is seen as in near total darkness in the South Asia image. “In November, when this picture was taken, Nepal was suffering 10 hours of electricity rationing a day. The astounding thing is that Nepal’s darkness is now visible from space. You can clearly make out Nepal’s border with India!”

Dixit, who has been chronicling Asia’s economic growth for many years, also commented on the bigger picture for South Asia: “If this is what India looks like when it is a developing country, imagine what it will look like when 1.8 billion Indians in future have the same standard of living as Europeans. And if most of that energy is coming from coal, what it will mean for the planet…”

Given its relatively smaller size, Sri Lanka doesn’t show up too well in many new images. But the laws of physics being universal, the island can’t hide its luminous signature either.

Sri Lanka at night shows lights concentrated predictably around the major cities and towns. But a closer look throws up some surprises.

Dr Kavan Ratnatunga, a Lankan astrophysicist who worked with NASA for two decades, was intrigued by the new night time satellite images of Sri Lanka.

“It’s very interesting that the brightest spots visible on the new map are found in the Greater Colombo area and in the Jaffna peninsula,” he said in an interview.

Our ‘northern lights’ are concentrated in and around Kankesanthurai and Point Pedro areas. They appear second only to Colombo’s.

“I have no idea what activity in Jaffna is giving out such a lot of light,” Dr Ratnatunga added, pointing out that the brightest lights in the Eastern Province are noticeable in and around Batticaloa and Arugam Bay areas.

The cities of Vavuniya, Anuradhapura and Trincomalee also show up, albeit at a considerably less luminous level.

The entire northern region of Sri Lanka did not show any concentrations of night lights in earlier such maps released by NASA, starting in 1994 and periodically updated every few years. For many years during the war, Jaffna was without a regular mains supply of electricity.

However, direct comparisons between the earlier and new maps are not possible, as the new images use more advanced cameras with greater sensitivity.

The A9 Highway, the 321 km road which runs between Jaffna and Kandy, is also visible in some areas as a thin bead of lights. As indeed are some other main highways that link urban nodes.

Dr Ratnatunga, who specialized in automated statistical analysis of astronomical data and digital images, also noted that a faint night glow is seen over much of Sri Lanka.

“Based on this composite image, the night sky seems to be the darkest in the Mannar and Kataragama areas – making them better locations for astronomical observations.”

In recent years, light pollution from cities and towns has affected serious astronomical observations. Worldwide, there is a ‘Dark Sky Movement’ among astronomers – both amateur and professional – to prevent this from becoming worse.

Overall, however, the island of Sri Lanka appears mostly in relative darkness at night – at least at the resolution of the night sky images.

The Ministry of Power and Energy earlier announced a target of supplying electricity for all areas of Sri Lanka by end 2012. While such universal coverage is unlikely, the national grid has been expanded to come within reach of more than 80% of households.

Google has just mapped the nighttime images over its existing blue marble map to provide a realistic view of our planet at night. Unlike NASA’s own images, this offers interactivity – allowing zooming in and zooming out within a range. Access this Google Earth at night from your computer — and explore our blazing signatures of light! 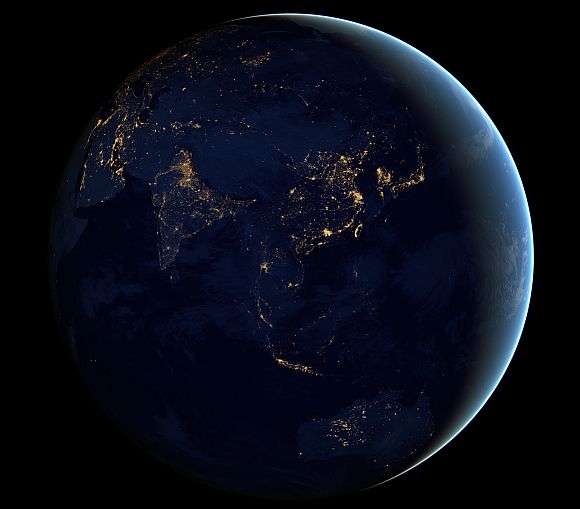