When Worlds Collide #21: Walking in Rio with Three Friendly Ghosts…

Posted on 24 June 2012 by Nalaka Gunawardene 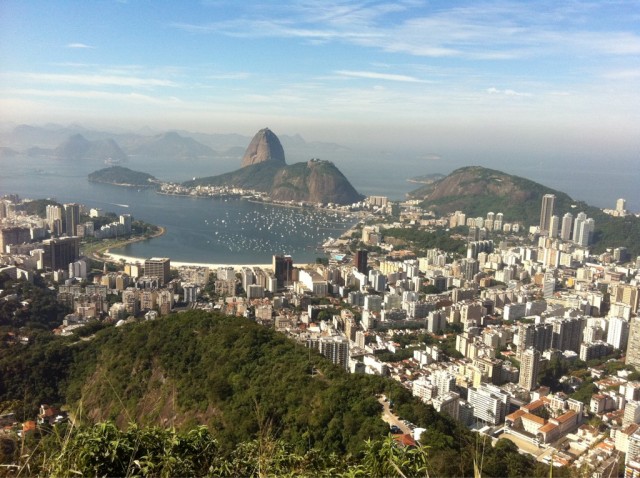 As government officials, activists, researchers and journalists from around the world converged in Rio de Janeiro this week for the UN Conference on Sustainable Development, everyone was clamouring for answers, solutions and agreements.

There are 50,000 bees and a lot of buzz, but where’s the honey asked fellow science journalist Aisling Irwin, consultant news editor at SciDev.Net.

For journalists, at least, there was no shortage of stories – if only we went off the beaten track.

I wanted to see real city beyond the tourist hype and summit frenzy. So, as the heads of state sat down for their talkfest at the Rio Centro convention centre, I walked the streets of downtown Rio.

The city had declared three days of holiday, life went on as usual. Planet saviours were in town, but the Cariocas – as the city’s dwellers are called — were busy earning a living or running their errands. The famous statue of Christ the Redeemer kept a watchful eye from the top of Corcovado Mountain.

The outside world has an exalted view of Rio as a city of picturesque beaches, scenic mountains and street carnivals. Rio is all that – and a whole lot more. I found it a microcosm of our world.

Rio is large, diverse and alive. With over 6 million packed into 1,260 square km of municipality area, Rio is the second largest city in Brazil (after Sao Paulo). Metro Rio is three times larger and is home to an estimated 12.5 million.

It’s a city where the first world (of affluence) meets the third world (of poverty and deprivation) – and somehow gets by. The picture postcards focus on where the ‘One Percent’ of rich lives. But without the cheap labour and informal economy sustained the rest, glamorous Rio will quickly grind to a halt.

Like most megacities, Rio has its unglamorous underbelly. One fifth of Cariocas live in over 1,000 favelas (slums), where housing is not regulated and social indicators are below average. A decade ago, the Brazilian movie City of God(Cidade de Deus, 2002) offered us a glimpse of hard life in the favelas: narcotic drug rings, hold-ups, street violence and police corruption.

A decade on, Brazilian friends say things have improved but major income disparities remain. During my brief visit, I felt that the two worlds co-habit better in Rio than in Johannesburg that hosted the Rio+10 conference in 2002.

As I walked the streets of Rio, I suddenly realized I wasn’t alone. Keeping me company were three friendly ghosts of accomplished communicators — and former colleagues — who had been there and left their mark. They were all game changers.

Anil Agarwal (1947 – 2002) was the founder-director of the Centre for Science and Environment (CSE), India’s leading environmental research and advocacy organisation. Trained as an engineer, Anil chose a career in science journalism, focusing on issues of sustainability and the needs of India’s majority poor.

Anil’s was a pioneering and incisive southern voice in global environmental governance. In 1990, with his colleague Sunita Narain, he wrote a path-breaking paper called ‘Global Warming in an Unequal World’. He argued that greenhouse gas emissions of the rich and poor were not equal. It inspired a global debate that had a considerable impact on the G-77 position in negotiations that led to the UN climate treaty adopted in Rio in 1992.

It was the first time that the issue of equity was raised in the context of global warming. Darryl D’Monte, a former editor of The Times of India and now columnist for several Indian media organisations, calls it an exceptional occasion when a South Asian journalist changed a global development paradigm.

As a member of India’s governmental delegation to the Earth Summit, Anil played a key role advising ebullient environment minister Kamal Nath who pushed for global treaties on climate and biodiversity.

British filmmaker Adrian Cowell (1934 – 2011) adopted a different strategy. He went deep inside the Brazilian Amazon in search of the root causes of rainforest destruction. His visual reporting first alerted the world how the Amazon was under siege from logging and land clearing.

In 1980, when the Amazon was first opened up to settlers and developers, he began filming his path-breaking series of five investigative films collectively called The Decade of Destruction, in 1980.

He stayed on with this story for over a decade, working closely with local activists and community leaders. This included Chico Mendes, a Brazilian rubber-tappers’ union leader and environmentalist who was murdered in December 1988.

Adrian’s films, writing and advocacy made environmental destruction in the developing world into a global political issue. The quietly contemplative Adrian gathered his evidence diligently, analysed it rigorously and released it on high impact outlets like the BBC and PBS (in the US).

His 1987 film Banking on Disaster had an interview with the then World Bank President admitting, for the first time, that a Bank loan had gone wrong (in Brazil). It triggered reforms of environmental safeguards in World Bank assisted projects.

Adrian made other memorable films, but his heart was in Brazil. At the time of his death in October 2011, he was finishing another documentary titled “Killing for Land”, about violent conflicts in the Brazilian state of Pará.

My own mentor Robert Lamb (1952 – 2012) worked with both Anil and Adrian at different times. Yet he had his own story-telling style, mixing inter-governmental processes with stark ground level realities. In over three decades he produced or commissioned hundreds of international TV documentaries exploring what sustainable development meant in the real world of the 99%.

He launched one of his most enduring film series called Children of Rio in 1992. His idea was simple yet brilliant: while politicians, diplomats and environmentalists debated the fate of the planet, he focussed instead on 11 babies born that year in different parts of the world. If the Earth Summit was to mean anything at all to ordinary people, he asked, surely it would be reflected in the lives of these children and their families?

One of 11 children of Rio was from Rio itself. Rosamaria was born in Rocinha, one of the most violent favelas, and grew up in a large extended family. A poor performer at school, she dropped out at 17 and gave birth to a baby boy soon afterwards. She is raising her son, Gustavo, now 18 months, with her boyfriend who isn’t his father.

Tens of millions of Rosamarias and Gustavos – all over the world — face uncertain futures on our hot, crowded and wired planet. Can the patchwork of compromises negotiated in Rio bring them social justice and hope?

But I did find glimmers of hope on the streets of Rio. Hours after the summit opened, thousands of activists assembled near the Candelária Church in downtown Rio and marched down Avenida Rio Branco. It was a riot of colour, song, dance and defiance – these Latinos sure know how to drum up a good demonstration!

A motley collection of indigenous tribes, feminists, environmentalists and socialists, they questioned the ‘green economy’ and protested the ‘corporatisation’ of state policies and the UN process. Their vision is a bit Utopian, but I cheered them precisely for countervailing the dystopian future that technocrats and diplomats were debating just 50 km away.

As Sunita Narain, who took over Anil Agarwal’s mantle to head CSE, wrote in an essay titled ‘Beyond Rio+20’: “So instead of focusing on things we cannot do, Rio 2012 should celebrate, loudly and boldly, that people (and nations) are not waiting for global consensus to emerge. They have taken matters in their hands. They are committed to change—change we can believe in.”

1 Response to When Worlds Collide #21: Walking in Rio with Three Friendly Ghosts…