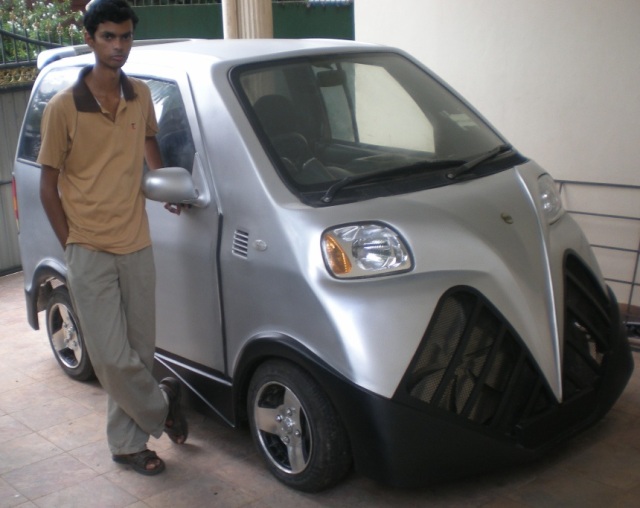 What’s the worst human invention of all time? The answer depends on whom we ask.

As a cheer-leader of innovation and currently host of a TV series on this topic, I keep asking around. I find there is no agreement on either the best or worst inventions — even top 10 lists vary enormously.

But many now agree that the internal combustion engine – which has literally driven our civilisation forward for a couple of centuries – needs serious rethinking. Burning fossil fuels (petroleum and coal) is costly, polluting and planet warming. We really need to kick our addition to oil.

Where do we begin? Electrically powered vehicles are much cleaner, provided the electricity is readily available and affordable. Are hybrid vehicles – now growing on Lankan roads – the solution, or just a transitory phase?

In fact, some all-electric cars have also been running on our roads quietly for a few years. Unlike hybrids, these don’t use any petrol at all.

Maverick engineer-cum-inventor Dr Ray Wijewardene owned Lanka’s first such car, an Indian-made REVA, which he registered in 2005. Long interested in electric vehicles, he struggled with the Department of Motor Traffic that didn’t initially recognise electric vehicles. Thanks to his advocacy, it does now.

Ray’s enthusiasm with electric cars was palpable. He used to drive his REVA to his coconut estate in Kakkapalliya in Puttlam District (80 km north of Colombo), recharge batteries overnight and return the next day.

He once gave me my first REVA drive around Vihara Maha Devi Park. It was a novel experience — a comfortable ride in a quiet, compact vehicle. “No pollution, no vibrations, no complicated engines,” he summed up. “This really is our future!”

Because it has no engine, there is also no need for a radiator, plugs, distributor, oil, crank, timing belts, fan belts or even a gearbox.

“Imagine a petrol-free world” is how REVA’s manufacturers, Mahendra, plug their product. As more people yearn for zero emission cars, some are actually toiling to make it happen.

Recently I met one: young Lankan inventor Nilanga Senevirathne Epa who has built a home-grown battery-powered electric car which he hopes to market from next year.

Named ELCA (short for Electric Car), it’s a two-door, two-seater version like REVA. If you’re not familiar with REVA, think of it as a small car that comes closer to a Maruti or Tata Nano.

ELCA is a rear-wheel drive car with a net weight of 600 kg. Forty per cent of this weight is taken by the lead-acid batteries: eight such batteries, each with 6 Volts, combine to provide a total of 48 Volts.

With its batteries fully charged, ELCA can run between 80 and 100 km. It can also climb slopes of up to 30 degrees.

Last week, I interviewed him and drove around in his prototype for my innovations TV show Malima. Watch it online:

On our test run close to Parliament, we found ELCA picks up speed quickly, and is quite manoeuvrable. Its maximum speed is 60 km per hour — ideal for city and suburban running.

Going at 60 an hour may not impress speed buffs, but consider this: the national average speed on Sri Lanka’s congested roads has come down to 26 km per hour, and in the Colombo district, just 22 kmph.

According to transport specialist Professor Amal Kumarage of the University of Moratuwa, by 2030 the average speeds are going to slow down further — to 19 kmph nationally, and 15 kmph in Colombo district.

So where would you go in your fast, large and heavy-polluting SUVs?

Recharging ELCA’s batteries is simple. It can be done at home by connecting it to an ordinary 5 Ampere power outlet. The batteries will be fully recharged in 8 hours. The ideal time for recharging is at night after 10 pm.

That way, it will not add to the peak-time demand that the Ceylon Electricity Board is struggling to meet. Smart (electricity) metering, now being promoted, can help consumers to choose off-peak, low-cost times to recharge their electric cars.

Inventor Nilanga describes his vehicle as ‘turbo electric’. Besides using batteries recharged from mains electricity, typically overnight, the batteries can be topped up when running on the road too. This happens when turbo blades fitted to the front are turned by the wind’s friction.

Turbo blades turn a dynamo, which in turn generates an electric current that feeds the batteries. The designer recommends only short spells of turbo blade use, no more than 20 minutes at a time. To reduce ‘drag’ during running, they should be turned off at other times.

This innovative aspect sets ELCA apart from REVA and other electric vehicles.

How does ELCA compare with small petrol cars? Based on prevailing (May 2012) petrol prices and electricity rates (for domestic light users), Nilanga calculates ELCA’s running costs at around LKR 3 (USD 2 cents) per km. According to him, the operating cost per km is LKR 10.50 for the Tata Nano and LKR 11 for Suzuki Marutis.

Is ELCA really a zero emission vehicle? At the car’s level, yes. At national level, it isn’t — because more than 80% of Lanka’s electricity is now thermally generated. But electric cars are still preferable: they centralise emissions in one fixed location (power plant), making it easier to treat than in numerous cars.

Is it safe? There is no risk of overheating or catching fire, assures the inventor. On the dash board is a big red button to press in case the driver wants to switch off power. ELCA is equipped with brakes and steering as any other car. The rest depends on each driver…

Nilanga is now working with a leading company to mass produce ELCA for the local market: 60% of the car is made locally (which means no import duties) but the motor and battery are imported from Japan.

Nilanga, who studied motor engineering in Malaysia and in the UK, has spent more than LKR 3 million of his family’s money developing ELCA. He wants ELCA to be an affordable private car for the average Lankan. The current plan is to market the car at LKR 600,000.

If all goes well (bureaucrats, please step aside!), ELCAs could be on our roads before end 2013. That time is needed to set up a production line and a network of rapid recharge centres.

Meanwhile, Nilanga wants to produce electric car batteries locally for cheaper. ELCA can run for approximately 50,000 km on a set of batteries whose (imported) replacement cost is around LKR 200,000.

Nilanga says he was inspired by Ray Wijewardene’s tinkering with all things mechanical. He might soon help realise one of Ray’s long cherished dreams: declare independence from oil. 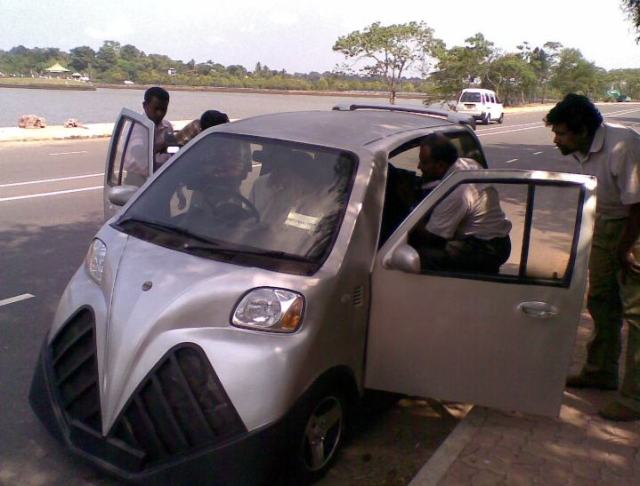 A science writer by training, I've worked as a journalist and communication specialist across Asia for 25+ years. During this time, I have variously been a news reporter, feature writer, radio presenter, TV quizmaster, documentary film producer, foreign correspondent and journalist trainer. I continue to juggle some of these roles, while also blogging and tweeting and column writing. There's NOTHING OFFICIAL about this blog. In fact, there's NOTHING OFFICIAL about me! I've always stayed well clear of ALL centres of power and authority.
View all posts by Nalaka Gunawardene →
This entry was posted in Air Pollution, Energy Conservation, Environment, Innovation, Sri Lanka, Transport and tagged ELCA, electric car, hybrid cars, innovations, internal combustion engine, inventor, Mahendra, Malima TV show, Maruti, Nilanga Senevirathne Epa, Ray Wijewardene, REVA, Tata Nano. Bookmark the permalink.